This Week in the Garden. Fionnuala Fallon.

Avoid leaving recently-cleared potato beds empty as the ground will soon become colonised by weeds. Instead spread an organic mulch to act as a fertility-enhancing, weed-suppressing blanket over the soil (suitable materials include well-rotted manure, homemade garden compost, grass clippings or products such as geeup.ie ........

The Journal of The Royal Horticultural Society.

Soil is the basis of Everything. By Billy Wigham. December 2019

Soil is star stuff. Just like us, it is a living, breathing organism.
It is made up of everything you can think of. It is older than we are, much older, and has a greater genetic diversity than we have. In fact, it contains more diversity than any other part of our planet. Soil influences every aspect of our lives. It feeds us, clothes us and is the great recycler. Healthy soil ensures we have pure air and clean water. Soil provides all land based plant life on earth.
Why would we poison this system intentionally? We mess with soil at our peril.
As gardeners have you ever gone to your local farm for farmyard manure for your garden or a bale of straw or hay for your strawberries? Or popped down to the local co-op for weed killer? I certainly have. The weed killers on sale not only kill weeds but they may also kill fish, bees, butterflies and worms. Chemicals sprayed by farmers on grassland and cereal crops pass through grazing animals into their manure. This manure can cause plant distortions and genetic aberrations, especially in peas, beans, tomatoes and potatoes. The weed killer labels state that no manure should leave the farm for up to 3 years. The poisons remain in the manure and distort growth for at least that long. Hay or straw that you might use as a mulch or give to your horse to eat, if it has been sprayed whilst growing, will also contain chemicals that will end up in your soil. The most damaging of these chemicals is Aminopyralid.
It is high time to stop recommending and manufacturing these dangerous products.
At Gee-up, we are very careful to ensure traceability of the horse manure we compost. Every batch of manure that comes in from the stables is composted separately and tested on seedlings before going to market. Gee-up is the ultimate in recycling. A natural material goes through a totally natural process and delivers everything that the soil needs to continue to produce plant growth in your garden.
Soil needs feeding just as we do. It breathes and needs water. Gee-up contains all the humus and nutrients for plant growth and for the worms and bacteria that are so necessary in the soil.

....take the opportunity in the coming weeks to clear empty beds of the remains of finished crops before blanketing the soil with a generous layer (5cm-7.5cm deep) of well-rotted manure, seaweed (just make sure it’s harvested sustainably and with permission), leaf mould and/or well-rotted garden compost.
Alternatively, if these are hard to get hold of, then get your hands on a few bags of Gee-up, the Irish-produced soil enricher made from horse manure.
...As for established trees and fruit bushes, check that any tree stakes and ties are secure against strong winds, and loosen or remove any that are overly-tight or not needed any more.
Then weed and shallowly mulch around the base of the plants to help prevent fresh weed growth and to lock in moisture (but only do this once the ground is already moist from autumn rains). Again, you can use well rotted manure, garden compost, seaweed, leaf mould or Gee-up. Just make sure the mulch is not in direct contact with the trunk/branches as it can cause problems with disease and decay. 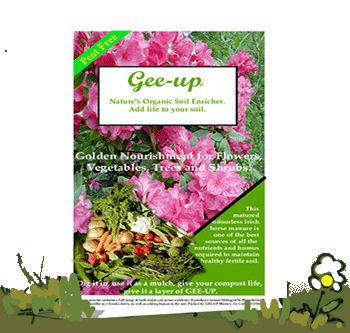 Whether you are a fair weather gardener who wants lush and colourful borders and shrubberies, or a dedicated grow-your-own vegetables gardener, Gee-up is what you need. It is well-rotted horse manure, pure, simple fertiliser, full of humus and nutrients to help your garden grow beautifully.
The simplest ideas are often the best and Gee-up started 15 years ago when keen gardeners Judy and Billy Wigham couldn’t get any good weed-free manure for their garden. Recognising what seemed an obvious gap in the market they went into production themselves, composting manure collected from local stables. Gee-up is now a thriving little business supplying sustainable happiness to all who appreciate that our soil is a most valuable resource. A positive asset for the future of our planet!

Gee-up is used as a soil enricher, adding slow release nutrients and humus to soil. It is pH neutral. It also makes an excellant mulch and can be used in the planting hole to encourage new plants to settle. It is a product for anyone who really appreciates the value of well-managed soil.
Gee-up is certified by the Organic Trust as suitable for use in organic systems and is used by organic growers all over the country. As a peat-free product, it is eco-friendly and supports a bio-diversified garden.

Recycling horse manure into high quality garden compost has made Gee-up, the Blarney-based business, a national success. More than 10 years ago, the founders developed a method to convert horse manure into a clean, odourless and highly effective product that has garnered a loyal following among gardening afficianados. This totally Irish product has delighted users over the years and they are now digging in for Autumn. Now is the time for tidying up your borders; weeding, pruning and spreading the Gee-up. Mulching the soil now will feed it for the next growing season; Gee-up adds humus as well as a wide range of nutrients and some worms too! The worms have been working away all summer long making Gee-up friable and luxurious to work with. It’s the way to make your flower beds look fantastic while improving your soil at the same time.

Weed out your impatience with a plan of attack

...My plan of action therefore this autumn includes smothering all existing annual weeds with a thick layer of organic material.
Those covered will die and any weed seeds on the soil surface which are deprived of light and air will not germinate.
Anything in the organic line will suffice: well rotted manure, garden compost, Gee-up horse manure or even pine needles which are wonderful beneath acid-loving rhododendrons and other lime haters....

Ear to The Ground Magazine

Buy Irish.
A top pick for us is Gee-up, an entirely Irish-made odourless manure product. The manure is collected from stables in Co Cork and composted, sieved and bagged near Blarney, Co Cork. Ten years old this year, the company is run by Bill and Judy Wigham, who have been keen gardeners and vegetable growers for many years. And this is a good news story in this age of business struggles
– the company has been steadily increasing its online business.

Everybody‘s garden needs a bit of a gee up as the growing season nears and Gee-up is just the thing to bring out the best in your blooms. There’s no tricky stuff, Gee-up is pure horse manure that is composted, extra long and extra hot. This kills all the weed seeds and leaves a clean, crumbly and odourless product that knocks the need for separate chemical fertilisers on the head, even for tomatoes and hanging baskets.There‘s no need for special composts or separate mulches, Gee-up does it all and it’s ph neutral.
This natural and environmentally friendly product is made in Ireland by Bill and Judy Wigham near Blarney in Cork. Celebrity gardener Dermot O‘Neill is a big fan and they sponsered his talk at Fota’s gardening seminar late last year.
Gee-up is available in all good garden centres or they can arrange bulk delivery nationwide.

A load of old horse sh*t!

…..A relative who is an expert plants woman … told me early on to "work the soil”. I followed her advice and in doing so never thought that I would come to love and appreciate manure so much… So, twice a year, in autumn and spring we wheel barrow tons of well rotted horse manure across the road for our borders.
It is fantastic stuff. Every wheelbarrow load fills me with excitement knowing that my beloved plants will thrive in its organic mulchiness. It nourishes the soil, it keeps the weeds down, it locks moisture in and its rich dark hue makes everything look perfect.
If you don’t live next or near to your own manure heaven don’t despair, ‘Gee-up’ (horse manure in a bag effectively) is an excellent product and from a Cork-based company too. This is available to purchase at a wide variety of outlets.

"...I have mulched with a special brand of horse manure called "Gee-up" ... the stuff has proved to be magic on the likes of hostas, herbaceous perennials, clematis, roses and shrubs which need to have constant moisture about their roots... if you spot the pink and green bag... try one and delight in the results"

"A lovely new Irish product arrived on my doorstep in time for spring mulching. Called ‘Gee-up’ ...The name is appropriate because not only is it made from well-rotted horse manure, but it promises to give vegetables, fruit, flowers, trees and shrubs a real boost or - gee-up just when they need it most, while also adding nourishment and humus to the soil. As I said, it‘s lovely stuff, doesn’t smell of manure, is pleasant to touch, satisfying to use and adds instant texture, life and bulk to poor, thin and neglected soils. I gave some to my precious paeony.. and it seemed to leap out of the ground to meet it, and now I’m off to give some to the fruit, in particular the gooseberries, raspberries, currants and rhubarb, which could not have a greater treat!"

Rural gardeners will have no problem sourcing animal manure but those in city and town will find an excellent product in that graded and shredded horse manure sold as Gee-up.
It neither smells nor looks unpleasant, it spreads easily and because it is dark brown and crumbly, gives a very professional looking finish wherever applied.